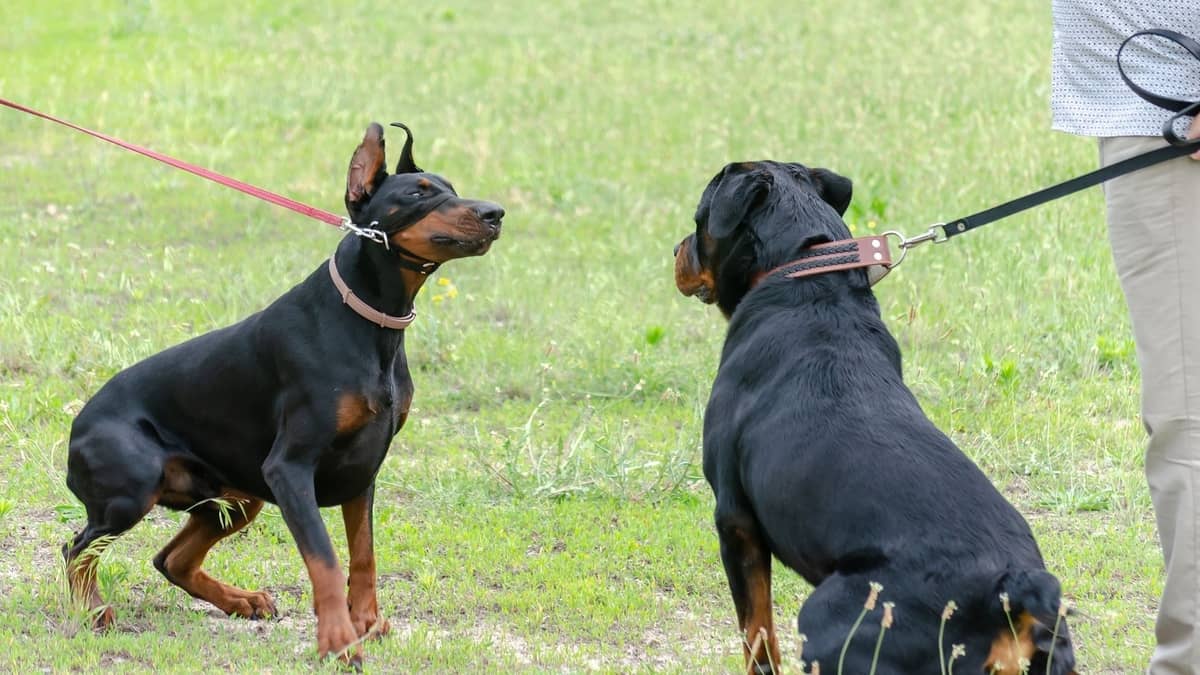 Dobermans and Rottweilers really do look alike, which is why many people ask themselves “Are Rottweilers related to Dobermans?” This question is a very common one, and that’s not without reason. In today’s article, we’ll be taking a very close look at the history behind both of these breeds and their genealogies, respectively, to learn whether they’re related or not.

Are Rottweilers And Dobermans Related?

The short answer is yes, they’re in blood relation. If you’re wondering who’s older, Rottweiler or Doberman, know that the Doberman is actually a descendant of the Rottweiler! However, these two breeds have become very different, which is why we separate them as two separate breeds today.

Read more about Half Doberman Half Rottweiler:  The Complete Guide.

What’s the difference between a Rottweiler and a Doberman?

Even though they share many similarities, primarily regarding their color, these breeds are actually very different. Firstly, Rottweilers are immensely powerful dogs. They can weigh up to 135 pounds, while the average Doberman rarely weighs more than 100 pounds.

Because of this, the Doberman is often much quicker than the Rottweiler. In return, the Rottweiler is much stronger. Basically, you have a better chance of outrunning a Rottweiler than a Doberman!

Regarding their behavior, there aren’t many differences between these two breeds. Traditionally, both were guard dogs, and they still earn a lot of praise for their protective instincts. Both species are fearless, loyal, protective, and ready to do anything for their masters.

Doberman is usually considered to be more energetic than the Rottweiler. However, both the Doberman and the Rottweiler require a lot of exercise. Additionally, since both of these breeds are so intelligent, they require cognitive stimulation. That means training, training, and training! You can also combine both and play fetch! Without this stimulation, both of these breeds can get very destructive.

Given how large and powerful they are, it’s best not to give them a reason to destroy your stuff.

When it comes to their physicality and their health, Dobermans are usually more agile dogs. Pairing that with their speed and endurance, they make a great partner if you like running! Rottweilers are of a stockier build, and while they’re not as quick or agile, they’re so strong they could be plowing fields if they wanted to!

Both of these breeds are susceptible to hip dysplasia (just like most large dogs; German Shepherds, the Great Dane, etc.), but the Doberman is also susceptible to the Von Willebrand’s disease. This blood disease can stop the blood from clotting, which can become potentially lethal if your dog injures itself!

History Of The Rottweiler

If we want to know how the Doberman came to be, we must first take a look at the Rottweiler, as they’re the older breed. The Rottweiler is actually one of the oldest breeds of all dogs. The Rottie we know and love today was initially utilized by the Romans as a war dog. The breed they bred is today known as the Roman Rottweiler. These dogs were even stronger and stockier than today’s Rottweilers, believe it or not!

With time, the Romans conquered the largest part of the European continent (more or less) and the Rottweilers would follow them. That way, they ended up in Germany, where the breed we know today had started to develop. The German town of Rottweil was the epicenter of this development. There, the Rottweiler spent its time working for butchers as a guard dog, protecting the meat, and as a sheepdog – herding animals.

In Germany, their frame became a bit smaller and they developed a thicker coat to cope with the harsh winters. The Rottweiler now has a double coat, and even though it has short hair, it’s still double-layered, so they don’t mind lower temperatures!

For a while, it was known as “The Butcher’s Dog”, but later people have just started calling it “The Rottweiler”, after the German town of Rottweil!

History Of The Doberman

The origin story of this breed is just as interesting! The Doberman was named after the man who bred the dog and more or less created the Doberman – Karl Friedrich Louis Dobermann. The story, which most historians and dog experts consider to be true, is that the man was a tax collector. As most tax collectors, Karl wasn’t particularly popular and people would often give him trouble when he had to collect their taxes.

So, Karl decided to bring a dog with him to collect the taxes in order to intimidate the people. He used a Rottweiler, but later he mixed the Rottweiler with Black and Tan Terrier. The breed that came to be is the Doberman (he decided to name the dog after himself). Mr. Dobermann died quickly, however, and someone else had to finish the breeding process. That duty fell upon the shoulders of Otto Goeller.

Mr. Goeller is actually a famous breeder, and it didn’t take him long to perfect the Doberman breed and standardize it to what we know today. Since many other people recognized the protective abilities of the dog, they decided to join in, and thus, the breed spread. It wasn’t long until the military and the police saw the potential use of the Doberman, which is why we see them as police dogs so often.

These breeds also differ in abilities and behavior. The Doberman is quicker and more agile than the Rottweiler, who is much stronger than the Doberman.

Both of these breeds, however, are very intelligent and require a lot of training and cognitive stimulation. They’re also very lively and they need to exercise daily not just to keep healthy, but to keep them from acting out! When it comes to health, both of these breeds are mostly healthy, but both are susceptible to hip dysplasia.