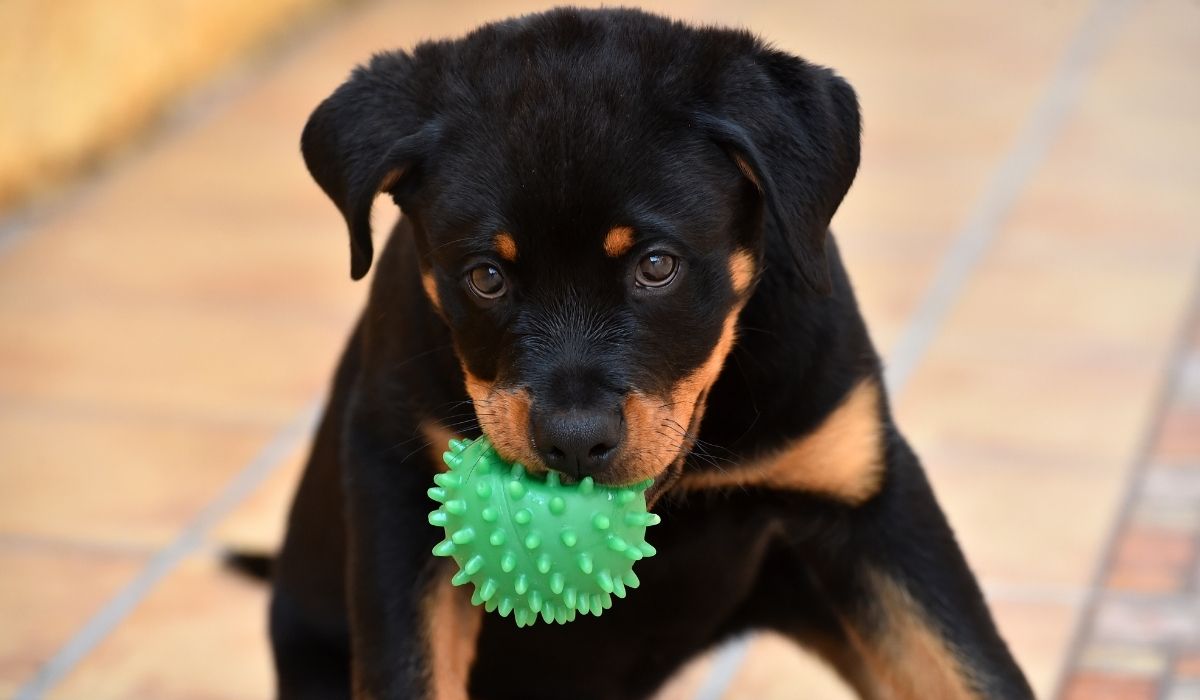 Rottweilers are very active dogs that require constant exercise from an early age, which is why some owners make a Rottweiler puppy exercise chart. By regularly exercising your Rottie, you’re ensuring that they stay healthy and fit for a very long time. In today’s article, we’ll be taking a look at the wanted level of a Rottweiler’s physical activity and a few useful exercises.

How Much Exercise Does a Rottweiler Need?

Many potential owners ask "Do Rottweilers need a lot of exercise?" Rottweilers are very active dogs that both love and need exercise. Ideally, a Rottweiler will exercise for at least 30 minutes a day, while an hour would be ideal. However, a time will surely come when you simply can't take them out for a walk or a run and they're stuck at home. Don't worry, your dog won't mind the occasional skipped session. Just make sure that this doesn't become a frequent occurrence. Rottweilers will only become more and more active as they mature, but they'll finally calm down once they get a little bit old. Older dogs still like to exercise, but they prefer walking over running and playing fetch. A Rottweiler that's fully reached their physical maturity would like an hour of exercise a day, but it's okay if you can only give them a half hour. During this stage, they can endure incredibly difficult tasks as they're incredibly strong animals, capable of exercising for a few hours a day!

Why is Exercise so Important?

Exercise is important for all dogs, but some breeds need it more than other. Rottweilers, for example, are more active dogs by nature. Because of this, they need more exercise than, say, a Bulldog. This natural need for exercise is most likely connected to their natural strength and endurance. Rottweilers have incredible stamina and they're frighteningly strong - it's not impossible that they feel a natural urge for exercise in order to keep those muscles strong and functional. Additionally, exercise is important to keep their body in good shape. This means that they won't get obese and that they won't develop issues with their skeleton. Arthritis, for example, is much more common with Rottweilers that don't exercise than with those who do. Exercise can be the making or breaking point of a dog's health!

What's a Good Exercise for a Rottweiler?

There are many great exercises for your Rottweiler. Primarily, you should definitely take your Rottweiler for walks. This is a great way to get some miles in, even if it's slow. Once you're alone, though, feel free to take the leash off and let them run. Running is an even better way to get the heart pumping. Taking your dog for a jog is a great exercise for both you and them. Rottweilers are particularly enduring, so they can certainly run for a long time. Playing catch with a ball thrower is another great exercise. This exercise isn't only physical, though, as the fetching-part is actually obedience training. Getting two birds with a single stone like this is a great time-saver. Then, we have swimming. Rottweilers are great swimmers and they aren't afraid of water. This is a great exercise, especially during the summer when it's hot, as they can't overheat in the water. Lastly, we have many, many obstacle courses for dogs. You can build one on your own, but most cities have these courses in dog parks. Dogs find them very fun and physical challenging as well.

When Should I Start Exercising My Rottweiler?

Experts suggest that you shouldn't exercise your Rottie too soon! They don't reach physical maturity until they're 2 to 3 years old (depending on the individual dog). Up until this point, exercise should be light. You shouldn't exercise a just-born puppy at all. Instead, wait for them to grow a bit. Once they're big enough, it's okay to take them for slow runs and play fetch with a ball thrower. When your dog finally reaches the age of three, you should feel free to work them out however you choose. At this point, your Rottweiler is fully grown and they have a few very strong, very active years ahead of them that their body is ready for!

What Should I Watch Out For?

There are a few important things to keep in mind when you're exercising your Rottweiler. Firstly, remember not to exercise them when it's particularly hot outside. These dogs are more accustomed to cold temperatures than hot temperatures. Because of this, it's actually safer to take them running during the winter than during the summer. Even though they're physically very fit, they can still overheat and suffer a heat stroke. Because of this, it'd be smart to take your Rottweiler swimming during the summer, instead of taking them for a run. A lot of dogs are also willing to run on a treadmill in a climatized area, instead of running outside where it's hot. You should also remember that they're very prone to arthritis and other joint problems, which is why you should never overwork them. This might not be important this instant, but with time that sort of training intensity might cause long-term health issues with their joints. If your dog starts displaying discomfort during one of your exercises, end the exercise. There's no need to overwork them and potentially destroy cartilage and bone. This will destroy your dog's quality of life in the long road. To sum up, if you’re creating a Rottweiler puppy exercise chart, remember that puppies need only a few minutes of exercise per day. Only physically mature Rottweilers need intense exercise. Also, keep in mind that these dogs can overheat during the summer because their body is more suited for colder temperatures, while they can also suffer from joint problems.

Read more about How to Take Care Of Rottweiler Puppy?

An adult Rottweiler needs an hour of exercise, and that can include running, swimming, walking, and playing fetch, ideally. Learn to enjoy these exercises because they’re crucial to keeping your Rottweiler from becoming obese or developing joint illnesses like arthritis. Make sure that you give them plenty of rest too!