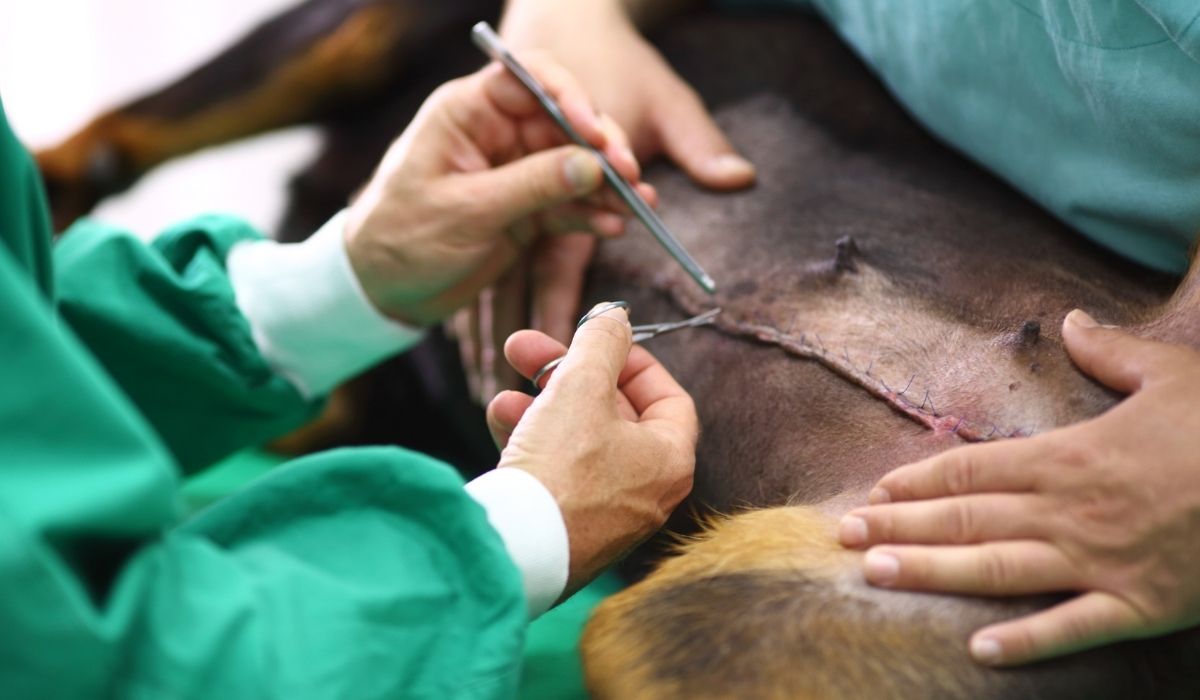 If you’re not looking to breed your dog, it might be best to neuter it, which is why many owners wonder when to neuter a Rottweiler. This is a routine procedure that most vets are comfortable with, but it’s still an invasive procedure. Because of this, it’s best to take a look at all the pros and cons before you take such a drastic step. That’s exactly what we’ll be doing in today’s article!

Neutering a Rottweiler Pros and Cons

The first reason why you should consider neutering your dog is to control the dog population! The world’s overcrowded with humans, but also dogs, and this can be stopped by neutering and spaying our dogs. Animal shelters and veterinary practices are always busy with new dogs, and vets agree that spaying and neutering dogs are the best solution to this problem.

If you neuter your dog, you’re also reducing the risk of testicular cancer, enlarged prostates, and cyst infections! One of the many unspoken pros is the fact that you’re also decreasing the chance of a genetic disease being passed on. Different lines of dogs from within the same breed carry different genes for different illnesses. Some families are more prone to cancer, for example, while other families are healthier.

If your dog belongs to a family that’s prone to a certain illness or illnesses, even though it sounds harsh, it’d be best to neuter them. This way, you’re ensuring that dogs with the same illness aren’t born anymore.

As we already explained, neutering your dog is still an invasive procedure that you have to be careful about. There are still risks and defects that are essentially kickstarted by this procedure.

For example, the life expectance of a Rottweiler is known to shorten after a dog has been neutered. It’s also not uncommon for a dog to develop joint disorders after being neutered, especially when large dogs are in question. Something that also takes effect in a bad way is early neutering. We’ll be going deeper into this question down the line, but some vets suggest that a dog that’s neutered too early in life doesn’t mature properly.

This is probably because a large part of maturity is actually sexual growth, connected to sexual hormones. When to Neuter a Rottweiler?

If you're wondering when to neuter or when to spay a Rottweiler, know that most veterinarians suggest that you neuter or spay your dog when they're still young. Six to nine months of age is the best period for neutering.

Taking too long to neuter your dog can cause complications with the procedure itself. However, neutering your dog too early in their life can compromise their development; physical, sexual and mental.

Vets also recommend not to neuter old dogs or overweight dogs (at least not until they lose that extra weight), as they face a great risk of complications.

What’s the Difference Between Neutering and Spaying?

During the process of neutering, the veterinarian will remove the dog's testicles. The process of spaying means that the vet removes the female dog's ovaries and uterus.

Will Neutering My Rottweiler Calm Him Down?

It's true that neutering your dog will have great effect on your dog's behavior. However, there's still some debate as to whether the effects are positive or negative.

Your dog will essentially lose all sexual urges. It's known that male dogs can be hypersexual, constantly mounting other dogs or even people. However, if you spay your dog, he will lose all sexual desire and this behavior will most likely stop.

Your dog will also become less territorial, less aggressive and it'll spend less time marking. Since your dog's testicles are gone, there's much less testosterone in his body, so there's less desire to mark his territory with urine by peeing.

The same applies to aggression. Even though a well-trained dog can control its aggression, neutering your dog might control it even better. However, experts remind us that this can backfire, as your dog's mood might be permanently altered and you might be turning it into an unwilling, unmotivated dog that's incapable of taking care of itself and its owners.

Should I Neuter My Dog?

Vets agree that there's no umbrella answer to this question. For some dogs, it's better to neuter them, but for other dogs it's better to not neuter them. Keep in mind that neutering your dog for behavior issues might not be the best idea. Even though it's always best to consult your vet before making any decisions, having an aggressive dog can be solved by training and even dog therapy in necessary. Both of these can be better options than an invasive procedure that's going to change the physiology of a dog. If you think that your dog is marking too much, remember that this is normal dog behavior and there's nothing wrong with it. The same rule applies to you Rottweiler being territorial - this is 100% natural for your dog as it's only defending itself and its family. Neutering your Rottweiler because you have a problem with your dog being defensive about its territory makes very little sense. On the other hand, neutering can help prevent or at least minimize the risk of many illnesses, which is why it's always best to ask for advice from your vet before making a decision.

To sum up, neutering your Rottweiler can be a good option if you want to prevent unnecessary mating and some diseases. If you’re wondering when to neuter your Rottweiler, know that it’s best during its first year of life. However, we do recommend that you ask your vet for advice before you commit to this decision. The process of neutering or spaying is invasive and potentially dangerous, especially if you consider the long-term effects it can have on a dog.